1968 saw the 'Roberts Brothers' back together again with a trio for a while using the meddyEVILS name, which was changed to MAYFAIR when we started the yacht club and upmarket wedding circuit!! Joining us on drums and vocals was Dave Bunney so we got into three-part harmony style.

Even after John and Dave hung up their instruments, I never stopped playing; my guitar collection grew; (click on 'Roy's guitars') home-recording studios went from half-inch tape to digital, and I still play once a week in a pub blues band along with a lot of (sad?) ex pros, including IAN DUCK who up to recently fronted THE RHINOMEN (and the guest member with 'the new meddyEVILS')

It's all history now you may say. But NO. Here we are some 40 years later and you can visit your local HMV record store and buy current CD's (about 5) with at least three MeddyEVILS tracks on them. Isn't it a coincidence, not only do I share the same 'vinyl' now with David Bowie but NO! – the TROGGS as well.

For a taste of what the 60's mod/beat boom was all about – listen to MA'S PLACE on the 'B' side of 'It's all for you' released in 1966 which has become the most revered and played track on many 60's play lists and as a 60's 'anthem' in Ibiza discos! 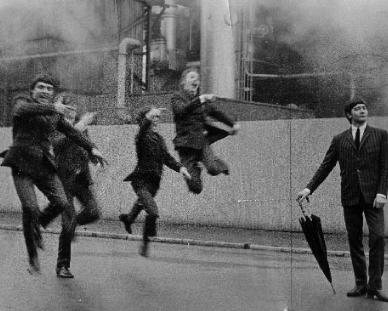