When I graduated in Fine Art from Southampton Art College I was handed my roll of paper by the Principal with the words "you were the best guitarist this college has ever had".

That heralded the start of career number one. Rock and Roll.

But let's go back a bit. I grew up with an artistic and musical Dad (he designed jet aeroplanes for a living!... an actual Rocket Scientist!) who liked drawing boats and planes and had a mixture of musical instruments, a chromatic mouth organ, a Ukulele Banjo and a Fife (a small flute thing!). Blowing and plonking (like George Formby who I met when I was 5!!!) shaped my later life (and the drawing bit too). My uncle Bert tried hard to get me into the clarinet - complicated little things. I had an E-flat and a B-flat, both with different fingering! I gave that up.

At Art College I was introduced to an ELECTRIC GUITAR (actually an electrified round hole acoustic) but it had a PICKUP and a JACK PLUG. (the first time I had seen a plug with only one prong). I just had to have one. My first was a Hofner Senator (with an added jack plug and pickup) and a homemade amp (a preamp, Quad Hi Fi power amp and a cheap 12inch speaker in a fetching red fronted cabinet... I later became a serial red-amp builder!). It sounded really crap but equipment was the key to success - just ask Bill Wyman!

Thornhill Boys Club was the test bed for skiffle and new bits of rock and roll, I was about 18 now and had a Burns Artist Vibrosonic (rare as rocking horse s**t now), a Watkins Copycat tape echo and a much better home made amp. The SKYLANES hit the scene soon after. Graeme on rhythm guitar (Hofner Verithin and Club 60), my brother John on a 'Roberts Brothers' homemade 'Precision Bass' and Nobby Randall was on drums. We didn't have singers in those days; we just played 'the Ventures', 'the Shadows' – that sort of stuff. Then my old college buddy, Tony Hole (aka Tony Benson) joined on vocals and we became TONY BENSON and the SKYLANES. We now had a PA (home made) and a Strat for lead and a real Precision Bass this time around (both purchased in 1963, the Stratocaster, Serial No 76351 cost £90 10s 6d and the Fender P bass was £118 10s 6d). We did quite well really. This must have been around 1964 when I bought a new VOX AC30 (£126 10s 6d!) The BEAT BOOM was really on its way with many different bands everywhere in Southampton, our hometown. 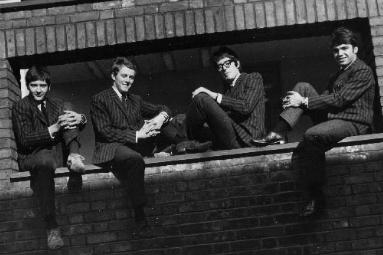